A ceremony, feast and fire in solidarity

A ceremony, feast and fire in solidarity

As the delegation of Indigenous, Inuit, Métis and bishops was preparing to go to Rome December 17-20, 2021, to meet with Pope Francis, there was an expressed desire among the Oblates across the country to do something in solidarity with that initiative. The Star of the North Retreat House and Sacred Heart Parish thought of collaborating in hosting a sacred fire. Fr. Susai OMI and I, who were going as part of the unofficial delegation, were preparing to provide daily updates from Rome. 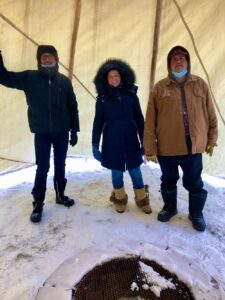 When the delegation was delayed, the director of the retreat house, Lucie Leduc, in conversation with Indigenous leaders, elders and me, decided to go ahead with a traditional four-day sacred fire at the Star which would now focus more on the survivors of the residential schools, MMWG and the children who never came home. Elder Maggie Hodgson told us, if we were going to do this, then to honor tradition and make it a four-day event.  When consulted separately, author and activist Morningstar Mercredi confirmed likewise, “do all four days in honor of residential school survivors and children” and she further advised us to start with a pipe ceremony and feast.

That decision settled into a place of peace within us.  There had been several “Together We Heal” presentations, notably by Morningstar, Lewis Cardinal and Jody Calahoo-Stonehouse, guiding us to understand the spiritual damage to Indigenous communities of demonizing sacred ceremonies, and of the importance of re-establishing sacred ceremonies to further healing and reconciliation.  A quote by TRC Commissioner Murray Sinclair deepened the peace of this decision – to paraphrase “when we (Canadians and Religious Canadians) accept Indigenous ceremony in its own right as genuine spirituality, we will be on our way to true reconciliation.”

This decision set off a flurry of activity – obtaining tobacco and broadcloth prints, shovelling out the firepit area behind the retreat house, getting a cord of poplar firewood, getting the teepee canvas and poles generously donated for the four days by the Enoch band, and setting up the teepee over the firepit. 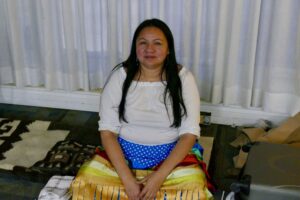 After William McCarthy, our firekeeper, had lit the sacred fire, the elder leading the pipe ceremony, Daphie Pooyak, set the tone for the whole event with the candid sharing that her freedom and all our freedoms are linked to the freedom of all those who abused, and that we needed to understand, forgive, and pray for them as well. She shared hard truths followed by inspiring words for a future filled with hope.  Morningstar affirmed with Daphie that the sacred fire lights a fire in us for “new beginnings”.

The feast for about thirty participants was provided by The Star of the North Retreat House and contributions from others. A portion of each item of food was taken out and placed on the fire as an offering to the ancestors. Morningstar reminded us that we were surrounded by our ancestors, and that we were there to pray for future generations, and the souls of all those in transition.

Photojournalist Terry Lusty brought a pictorial display of the last TRC event that was held here in Edmonton. It was placed in the Willow Room for people to view when they came to pray at the sacred fire which was kept burning from Thursday evening to Monday morning. William, Morningstar, Lucie and I took turns spending the night in the teepee watching the fire, assisted each day by Gary Gagnon, a member of the official delegation. 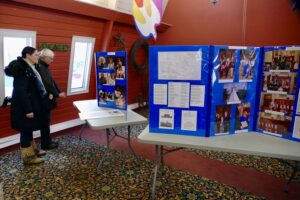 A variety of people and elders came over the four days to pray at the fire. They would be offered tobacco to place on the fire, view the display, and visit with whomever was around. As I was not in Rome, I was free to be present and hear the stories of those who wanted to share – both pleasant and painful. One elder drove down from Cold Lake to join us in prayer. Another using a walker came into the teepee with her daughter, sat down silently, placed tobacco on the fire, prayed quietly for some time, and left as silently as she came. It was a powerful moment for those in the teepee at the time.

Just before sunrise on Monday morning, Morningstar performed a closing ceremony, then the teepee was taken down as the fire was allowed to slowly extinguish itself. There was a feeling of quiet fulfillment, serenity, and contentment that we had done what we aught, each in our own way, to facilitate healing and reconciliation for all who came. It was also a privileged moment for us to welcome many Indigenous people to the Star for the first time.

Even after decades of ministry among the Indigenous people, I found myself still learning more about the depth of Indigenous spirituality, the sacredness of the whole event, the intensity of the emotions around the unmarked graves and the profound woundedness and loss experienced by survivors of the residential schools.  As religious and spiritual people, we continue to learn how colonizing with superiority and domination over Indigenous spirituality requires a reparation of respect and of deep listening engagement with our Indigenous brothers and sisters as we continue the path of truth and reconciliation.