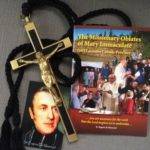 OMI Lacombe Canada was founded in 2003 in response to the changing face of the Roman Catholic Church in Canada. We are part of the worldwide congregation of priests and brothers called The Missionary Oblates of Mary Immaculate who serve the poor in more than 60 countries on five continents. The Oblates first arrived in Canada in 1841. As the young country grew we grew with it, quickly moving West and serving First Nations, Inuit and Metis people along with the early immigrant communities from Europe, and founding most of the dioceses west of Ottawa.

Today the 200 Oblates in OMI Lacombe Canada devote our lives to the service of the poor throughout the country’s smallest towns and largest cities. Called to live in apostolic community, we live our mission in community. The majority of the members of OMI Lacombe Canada live in communities under one roof with other Oblate brothers and priests.

The members of OMI Lacombe Canada seek to rediscover and incarnate in its members, its communities and its works, the One who said: “The Spirit of the Lord is upon me, because the Spirit has anointed me to bring good news to the poor… to proclaim release to the captives and recovery of sight to the blind, to let the oppressed go free” (Luke 4).

Our life at both the local and provincial levels reflects the following principles: