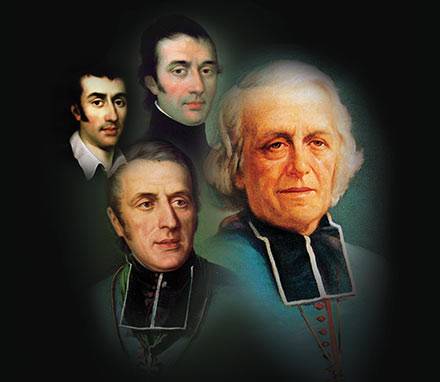 Eugene de Mazenod was born on August 1, 1782, at Aix-en-Provence, France, on the eve of the French Revolution.  His father, Charles, was of the noble class; his mother, very wealthy. At the age of eight, young Eugene had to flee France as it was rumored that the revolutionaries intended putting to death the sons of nobles. His exile lasted eleven years.

Returning to Aix-en-Provence as a very worldly young man of twenty, Eugene sought to re-establish the family fortune by marrying into wealth. First he could not find a woman rich enough, and then, the woman he intended to marry died!

But on Good Friday, 1807, at the age of twenty-five, Eugene encountered Christ in his own life and recognized him as his Savior. “My soul was longing for its ultimate goal, God, the unique good whose loss I deeply felt.” Long dormant aspirations came alive.

At the age of twenty-six, Eugene entered the seminary of St. Sulpice in Paris. His ideal was clear: He would be the servant and priest of the poor.

Ordained in 1811, his bishop was faced with the dilemma of what to do with this young aristocrat. “…so personal and impetuous” he was relieved when Fr. de Mazenod asked to work with the poor and abandoned of the cities and outlying missions. The zealous young priest turned his efforts towards the youth. He founded an association for young people. He worked also with prisoners and preached to the poor.

In 1815, Eugene de Mazenod felt the need for companions, who would share his apostolate, live in community with him, and commit themselves to God through religious vows. On January 25, 1816, Fr. de Mazenod and four companions committed themselves to God and dedicated their lives to bring the Good News to the poor. This they would do primarily by preaching parish missions. Pope Leo XII approved the Society in 1826 under the name of the Congregation of the Missionary Oblates of the Most Holy and Immaculate Virgin Mary. At his death in 1861, his religious congregation numbered 417. His Oblates were found in France , Great Britain, Canada, the United States, South Africa and Sri Lanka . Today the Oblates number over 4000 brothers and priests working on five continents.

In 1995, the Church officially recognized him as a Saint.

Saint Eugene’s main spiritual synthesis is the book of the Constitutions and Rules of his Institute, a code of missionary action and of apostolic religious life. “The spirit of total devotion for the glory of God, the service of the Church and the salvation of souls is the spirit proper to our Congregation”, he wrote in 1817. He further stated, in 1830, that we must look upon ourselves “as the servants of the Father of a family commanded to succour, to aid, to bring back his children by working to the utmost, in the midst of tribulations, of persecutions of every kind, without claiming any reward other than that which the Lord has promised to faithful servants who have worthily fulfilled their mission”.

All his life, as a priest, a missionary and a bishop, Saint Eugene sought to teach the poor “who Jesus Christ is”. Paul VI said of him that he had been a pastor passionately committed to Jesus Christ and an unconditional servant of the Church. John Paul Il on the day of his canonization, December 3, 1995, declared Saint Eugene as an “Advent man”, one who opens the ways to the Lord whose new coming will be the fulfillment longed for by all humanity.