A good life only comes…When we go beyond the law

A good life only comes…When we go beyond the law

The Gospel story today is clearly about the need for us to be humble.  But there is also something deeper here.  Following the Law is good, but insufficient.   As St Paul often says: we are not saved by the Law, but by the Grace of God.

The Law is the minimum we are required to do, and it is usually in the negative: Don’t do that.  However, Grace, is always in the positive: a free choice to help another person.  After some time, obeying all the Laws frustrates us, but when we allow Grace to move us to action, we receive the blessings of joy as we see others “promoted” to success or their suffering reduced.

The Pharisee in today’s Gospel represents us in our desire to minimise our wrong doing, and ignore the things we have not done sufficiently.

I think it would be fair to say that everyone has good and bad aspects to their character.  We try to reduce the “bad” by doing more “good” actions.  However, to become great we need to not only do “good” ourselves, but recognise and promote the goodness in other people. 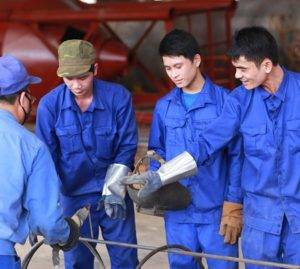 In developed countries now-a-days, there is a great emphasis on promoting the well-being of our youth – especially at school.  This is good, to a certain extent.  But it must always be accompanied by modelling of respect for others, especially those who may not be able to achieve high success in academic or sporting activities.

The growing sense of “entitlement” felt by many young people around the world may be partly due to this emphasis on praising the youth at schools and public functions.  Praise is good as long as it is tempered by correction and demanding their contribution to society:  (as the saying goes) privileges and responsibilities go together.

In that regard, perhaps our Gospel reading is less about the obvious contrast between humility and arrogance, and more about challenging each of us: are we fulfilling our responsibilities?

The Pharisees developed a great sense of entitlement partly by demonising other groups (eg. Samaritans), and creating many small regulations that ordinary working people could not find time to fulfil: unlike the religious leaders who made it part of their “work”.

So, instead of becoming servants of the people, they made themselves into “more equal” members of the people (hints of Animal Farm by George Orwell).  Are we guilty of the same?

What responsibilities do we have?  Are we guilty of any of the following?
Pope Francis reminds us that Mercy is a key feature of Christian life.
Pope Francis has often said: “gossiping” is very destructive.
Pope Francis says: where there are lies, there can be no love.
Pope Francis says: People unable to give have become slaves to possessions.
Do we make ourselves available for regular family gatherings?  Our family need us.
Do we create opportunities for youth and others to contribute or have jobs?
Do we respect the environment?

We are invited today to not compare ourselves to others who are more obvious sinners (thieves, murderers, child abusers, etc.) but to reflect more deeply on our own less obvious “sins”:
the things we are not doing!

When we are doing what we can to build up the community around us, then the First Reading will come true for us: God will bring justice quickly, because we are ready to work with God.

Finally, community and culture can only change when there is a predominance of love and understanding, rather than demonising and bad-mouthing others.

Let us be reminded that we are all in the boat together, and happiness is only guaranteed if actively try to help others around us.