Living Advent 2022 Through the COP15 Convention on Biodiversity

Living Advent 2022 Through the COP15 Convention on Biodiversity

During the season of Advent, we celebrate the arrival of that new life which changed the world forever. But Christians don’t just wait impatiently, hovering like children anxious to tear open gifts on Christmas morn. An adult faith moves us to prepare the way of the Lord by deeper reflection, leading towards changing ourselves and our practices. Living through Advent, we open ourselves to the incarnational activity of God’s grace – not just 2,000 years ago – but in the world today.

No wonder Advent’s quintessential symbols are those four coloured candles, moving us from darkness to light. As we grow in understanding and insight, we can also change. And nowhere is this change more necessary than in humanity’s treatment of God’s Creation, meaning all of nature and our relationships with other humans within it.

I invested a good part of my Advent journey from December 7 – 19 following the UN’s Conference of the Parties (195 countries of the world) on Biodiversity, which took place in Montreal. Why was this event so important? As the UN reported, “An average of around 25 per cent of species in assessed animal and plant groups are threatened, suggesting that around 1 million species already face extinction, many within decades, unless action is taken to reduce the intensity of drivers of biodiversity loss. Without such action, there will be a further acceleration in the global rate of species extinction, which is already at least tens to hundreds of times higher than it has averaged over the past 10 million years…”

Christians believe that Christmas is the feast of the Incarnation – but would Jesus come to a dead planet? Between climate change, loss of biodiversity and on-going warfare, humans are threatening the very survival of life on earth.

So religious people have been moved to respond. It was impressive to note that for the first time, a multi-faith coalition of some 55 organizations prepared for over two years to form a coordinated caucus at COP15, meeting with government negotiators, pressuring for substantive progress and coordinating with other constituencies of women’s, Indigenous and environmental groups.

I had previously “met” Amy Echeverria on-line, but our first in-person meeting happened during the 7:30 Mass at Marie, Reine du Monde Cathedral on a cold Saturday morning. There, Bishop Alain Faubert spoke of the biodiversity crisis, welcoming the delegates, and assuring them of our on-going prayers for the success of COP15.

Amy is the staff person in the USA office of the Columban Missionaries and served as the co-convenor of the Faiths@COP15 coalition. She described what it was like to wait expectantly for the final negotiated Agreement – which was released at 3:30 am on the final day – as “a Midnight Mass experience.” Praying for a meaningful accord, Amy said, was like hoping “for Advent light to emerge from the darkness.”

Alexandra Goosens-Ishii, policy lead for Faiths@COP15 described the final Agreement’s “potential” for transformative action. The signatories agreed to preserve 30% of the Earth’s land and waters by 2030 (the famous “30 by 30” demand.) For the first time, this Agreement mentioned agro-ecology, so important to rural producers. It recognized the special role of Indigenous communities (whose territories protect 80% the Earth’s biodiversity in the forests, deserts, grasslands, and marine environments in which they live – although they comprise less than 5% of world population.) 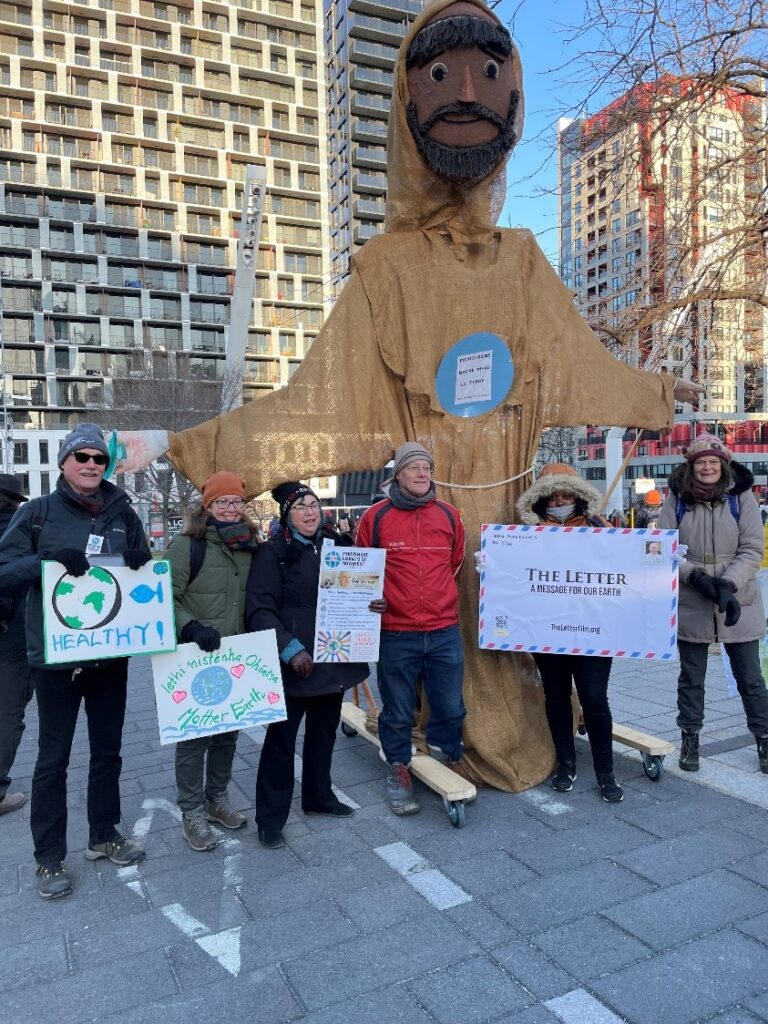 Members of Catholic faith communities (Le Centre Oblat: A Voice for Justice, Sisters of St. Martha, the Laudato Si Movement, the Montréal Archdiocese) pause during COP15 March for Biodiversity on December 10 in Montreal with a puppet of St. Francis of Assisi.

Nonetheless, she acknowledged that governments do not usually meet the targets that are set at these international gatherings. The Agreement includes no mandatory requirement for the business operations of multinational corporations to preserve biodiversity and allows only voluntary mechanisms to ratchet up ambition to meet targets. Most spectacularly evident at COP15 was the deep distrust of the countries of the Global South for the offers of financial commitment from the wealthy nations. ($20 billion USD per year was promised by 2025, and $30 billion by 2030.)

Clearly, faith communities have a role to play, along with civil society groups, in pushing governments to keep their promises and even to increase their ambition to meet the common good. Education about the need to preserve biodiversity, and to reduce the impacts of climate change are essential. But acting in our own faith institutions and communities is equally important. For example, local action to “prevent, reduce and work towards eliminating plastic pollution” (Target #7), and “reducing overconsumption” or “reducing waste generation” (Target #16) demand both local as well as larger policy responses.

Authentic Advent observance by increasing our care for God’s Creation can allow us to celebrate the birth of the Lord in truly incarnational actions. As Amy Echeverria concluded in an interview with the National Catholic Reporter, “Light does shine in the darkness.”