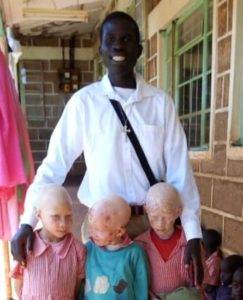 May 10, 2019.  It was the day I was eagerly waiting for. I was a good mathematician counting to see how many days are remaining. The day finally arrived, it was my first time going for pastoral activity. I was just used to Sunday apostolate that I used to do at lang’ata women prison. After morning mass and breakfast, I boarded a bus and headed to St. Stephen Kionyo parish. When I arrived there, though I was tired, the PMC Children and their animators welcomed me in special way. Children who were preparing to go for charitable work the following day came where I was, singing in kimeru asking me to dance! Though I was tired, I got energy to do so. Then I proceeded to the house. Fr. Constant was happy to see me he welcomed me to Kionyo. Served me a cup of milk.

The following day I joined the PMC children for charitable work. We went to Igoji at St. Lucy School for the disable and orphans. There were almost 200 children in that orphanage. Among them, there were 10 Albinos. I manage to interact with three young Albinos. They have problems; the major one is that they face rejection from society, people take them as cursed ones or bad omen. One even told me that in the family where he comes from other children are prohibited to play with him! So they feel lonely. You can image the hot African sun, shining and these Albinos have no cap or hat to cover their heads, this has caused some to have more skin problem and rashes in their bodies.  There were some blind children who were using a brail machines to learn. They only have two brail machines in the school and there are 30 blind children, it was a great challenge for both the student and the teacher. I thank the Oblates and parishioners of St. Stephen’s, Kionyo, for the charitable work they do.